Posted on June 12, 2013 by alwaysgail photography by Gail Fischer

It was early Saturday morning that I hiked through the muck, slid through the hole in fence with the “No Trespassing” sign and raced over the railroad track bridge to see what new graffiti was in progress. On our last trip in- I was accused of being a “cop”. I was wearing my sunglasses on my head and they were reflecting sun as I stood next to the bridge admiring the handy work of the graffiti artist. A gentlemen cautiously approached me, certain that I was with law enforcement. He was wearing a large backpack and was checking on the state of the street art on the bridge walls. What I learned that day is- there is a turf war going on among graffiti artist. If you are considered great and respected among your peers, you do not paint over anyones artwork. I had entered a new underground world of talent and by returning to the tracks I found a new war- this time they were after COOP. The warnings were strong and threatening. Whomever you are- they are out to get you. You have crossed the line, left your mark, and are now being watched. They say they know who you are “bitch”. See for yourself. Coop’s work is actually different and illustrates a new style in my mind. 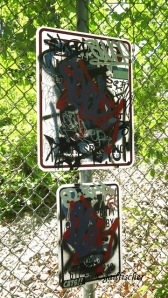 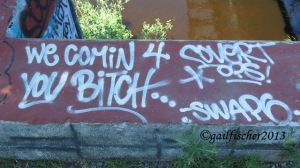 SWAP is the man. 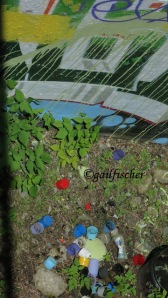 About alwaysgail photography by Gail Fischer

I am a photographer who loves to explore everywhere and everything. The journey began in Covington, KY where all the back alleys were sources of great places of visual imagery. After college the desert outside of Tucson, AZ became my place to watch sunsets and seek solitude. Later, NYC was totally exciting and the years there led to a career as a shooter.
View all posts by alwaysgail photography by Gail Fischer →
This entry was posted in artist, food for thought, graffiti, painted walls, People and Places, Photos, street art, turf wars, Uncategorized and tagged Boston, bridges, graffiti, outdoors, paint, painted rocks, RXR tracks. Bookmark the permalink.